First of all, let me say this is probably the article I am most proud of, but it is not my creation; I just want to use these lines to transcribe what Barry Penaligon himself wrote to me some days ago. I feel honored and proud to spread this, and I’ll try to keep it as it was originally written – I’ll only add some comments in brackets, some little corrections, and photos with comments. But who is Barry? You should keep reading…

If you are interested, this article is also available translated into my mother language, Spanish, in another article in this blog. Probably, comments could be richer there due to obvious reasons.

So, a big THANKS to Barry and Ian, to the whole Formula Sound, and especially to you, the readers, for spending your time reading this. Here it goes:

The following is a brief history of Formula Sound

Formula Sound Limited was started by Tony Cockell in about 1978, Tony was a sound engineer for 10cc in the early 70’s and then started building sound desks, one went into the 10cc Strawberry studio and a touring mixing desk was build for Demis Roussos.

Tony thought the market for studio desks was too unpredictable and decided to design some small commercial audio equipment, easier to make and regular sales. So the first Formula Sound product in about 1978 was a 1RU graphic equaliser called the SE1, following customer feedback it was modified and became the SE19 and a third version was the SE21. 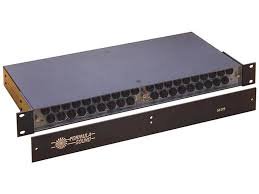 In the early 1980s Tony thought it would be a good idea to do a modular mixer, giving choice of inputs and making it easy to service and this was how the PM80 came to be designed.

Formula Sound PM-80: as a curiosity, pay attention to EQ knobs sorting: treble is the lowest position, while bass in the top (image courtesy of FutureMusic)

Following the success of the PM80, Tony had some ideas to take the modular mixer idea further and in the early 1990’s designed the PM90.

In PM-90. EQ layout was swapped so that low freqs were in the low position. Also, the curved vumeter was  replaced by the horizontal one (both especially iconic from FS). Image courtesy of Hispasonic’s user Resistance

The PM100 was the successor to the PM100 [correction: PM90], with lots of features and universal input modules.

As a curiosity, PM-100’s crossfader is based in VCA operation: sound doesn’t passes thru it, but a couple of operational amplifiers use the power adjusted by both sides of the XF to amplify signal on each side. Thus, even if the XF is worn, it won’t afect sound, and it doesn’t need to be a high quality fader to provide high quality results. Oh, and another curiosity: in REC outputs, colors are swapped: Right channel is actually going through the white connector and viceversa

Did you know the clear pushbuttons used in the latest PM-100 units were directly manufactured by Formula Sound, as the supplier stopped the production of the typical windowed black ones?

The System 2000 was a step in the studio mixer direction with 100mm faders.

If we had to mention the paradigm of solid construction in a classic modular mixer, that is -no doubt- the astonishing System 2000

The FSM600 (originally called the SX1) was a fixed format install mixer, easier to build and therefore lower cost than the modular mixers with a couple of features Tony felt were important for a DJ at that time (AUX send and voiceover). 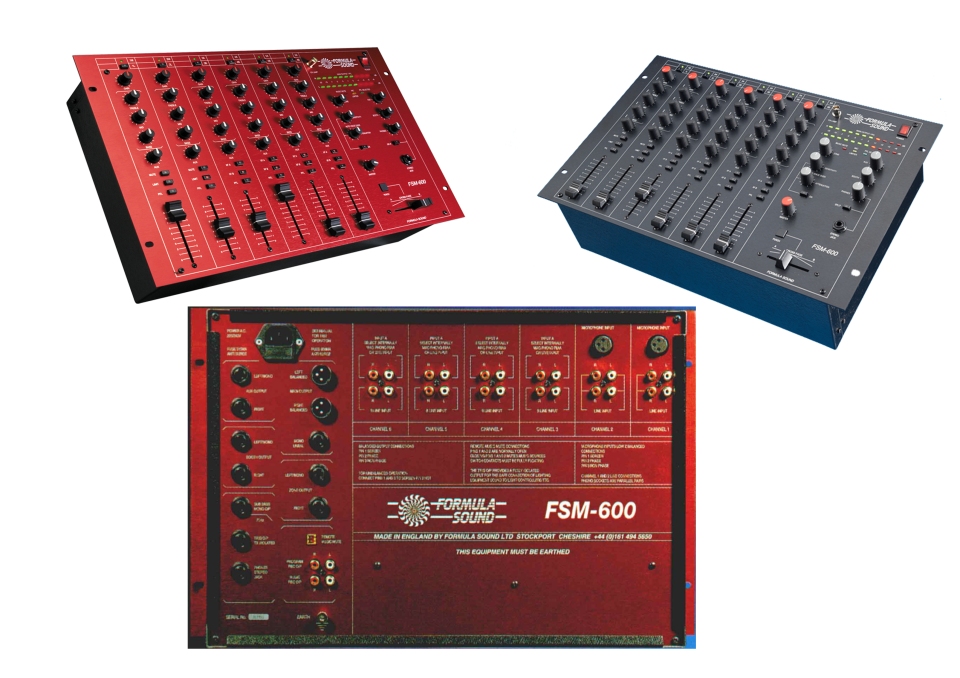 FSM-600 is mostly seen in red color; take a look on the resemblance to PM-80/PM-90 that black frontpanel and knobs provide. There’s also a 4-channel configuration, named FSM-400, with blue or black frontplates

In 2003 Tony was approached by Funktion one to design a mixer that they felt would suit their speakers, this was the FF6000 and was launched in early 2005. 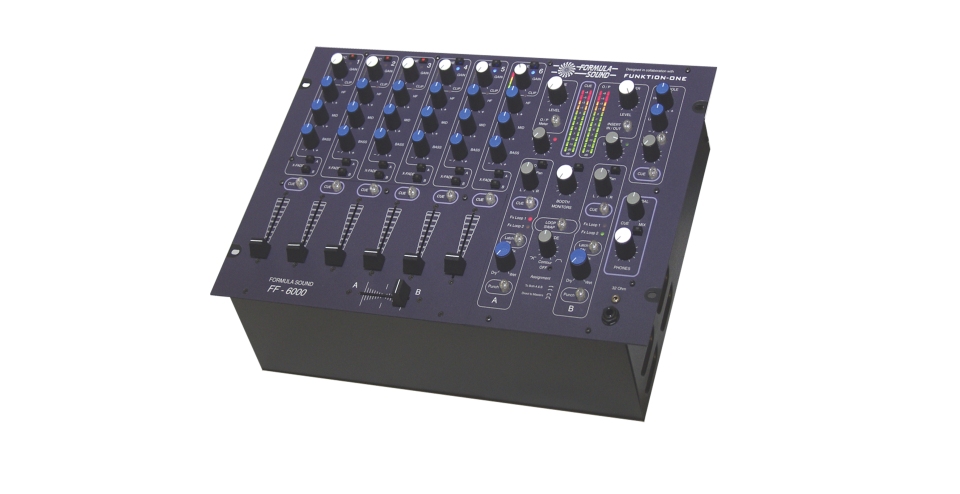 The FF-6000 mixer, with those lovely and precise big knobs. However, I always get annoyed when seeing pictures with vumeters jumping into red color, grrrrrr…

In 2005 Tony sold the company to Devshi Gami (70%) and myself (30% which I sold to Devshi a couple of years ago so Devshi and his family are now the sole owners). Tony remained with the company for 2 years while I learnt about Formula Sound design techniques and standards.

Between 2005 and 2007 Tony designed the PM80R, which was how Tony felt he would update the PM80 with what he had learnt over the years.

PM-80R inherits the spartan beauty, the sound quality and the rugged construction seen in PM-80 and PM-90, recovering the iconic curved vumeter layout from the original model

Tony also felt a modular Zoner would be a good idea so in this period he also designed the ZMR80 modular zoner, a zoner that is still probably the best audio quality zoner in the world.

My first full mixer was another collaboration with Funktion one, the FF6.2L launched in 2016 and recently the FF4.2L and rotary versions of the FF6.2 and FF4.2.

The FF6.2 built on the FSM600 and FF6000, keeping with analogue audio and vertically mounted boards with leaded components. A number of the circuits have been improved and a full kill EQ developed plus variable frequency filters.

Formula Sound remain committed to designing high quality audio products, with analogue audio and leaded components that allow the product to be maintained and serviced for a long product life.

Let me add a couple of thoughts:

I do love to know more about those brands that I consider fond of – not from the guts, but from my brain and ears, and as a recognition of their merit and quality above all. And this is one of the clearest examples. 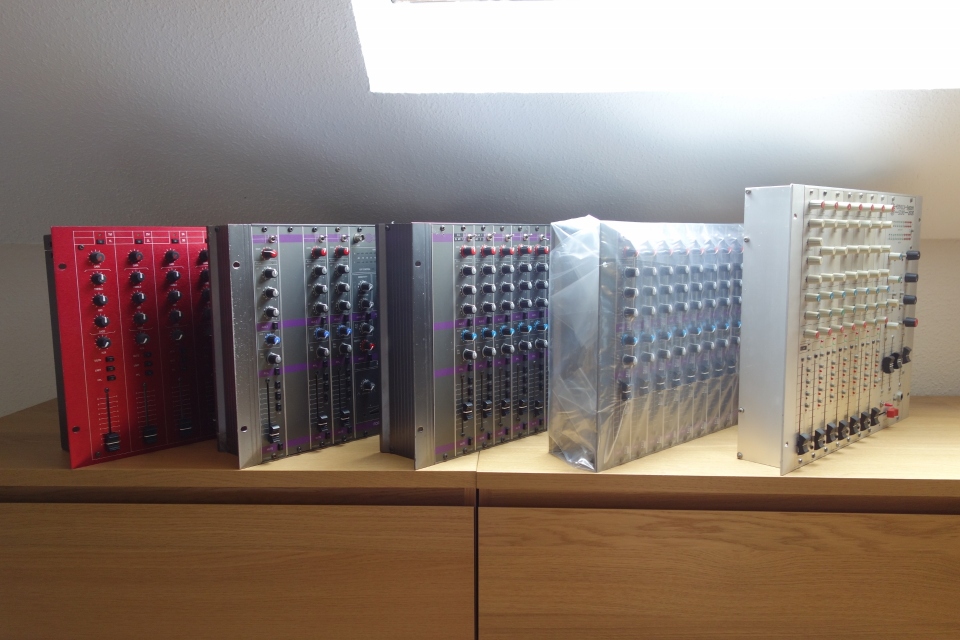 Some of them already gone… but surely more to come in a near future (I hope!)

Personally, the fact that Barry kindly gifted me with these lines is something that not only honors him but also makes me deeply proud as a result of being able to spread this kind of information in Spanish. I wish to widen this info pretty soon with more alike articles.

In case you are interested in this kind of info (if you’ve reached here, you surely are), here you can find what I consider the most valuable Formula Sound-related information in the Internet in Spansih language:

Kind regards to everyone, and a big THANKS for your time and interest.